Diversity in the Curriculum: There’s More to Learn

The first half of the twentieth century is the story of higher education coming down to earth. College education grew more and more relevant to worldly life, as the traditional liberal arts curriculum gave way to science and vocational training. Universities forged relationships with industry, drawing funding from the private sector and producing an educated workforce in return. By 1950, universities offered a broad array of programs in arts and sciences.

“[S]o that the church of Virginia may be may be furnished with a seminary of the Ministers of the Gospel, and that the youth may be piously educated in good letters and manners, and that the Christian faith may be propagated…”

But secular life quickly took over. Harvard University, the oldest university in the U.S., graduated about 70% clergymen in the 17th century, 45% in the 18th, and by the latter half of the 19th century, only 10%. James Walker, Harvard’s president from 1853 to 1860, lamented the waning influence of divinity: “Now a professor is as much a layman as a lawyer or physician.”

The shift toward secular, practical education was inevitable. Thomas Jefferson was an early advocate of expanded higher education opportunities. He argued that America’s growing democracy needed an educated citizenry and that the growing market economy needed a skilled workforce. His vision came into fruition in 1862, when Abraham Lincoln signed the Morrill Land-Grant Act pledging to “donate Public Lands to the several States and Territories which may provide Colleges for the Benefit of Agriculture and Mechanic Arts.” 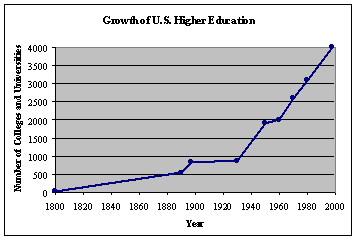 The Land-Grant Acts of 1862 and 1890 opened the floodgates for the establishment of new universities. Between 1870 and 1897, the number of higher education institutions reached 821, up from 23 in 1800. These schools were secular institutions built on a practical mandate–to promote agriculture, science, and technology. The traditional liberal arts curriculum grew to include social science, applied sciences such as engineering, and professional training. By the close of the nineteenth century, theology schools represented only 13% of higher education institutions.

During the first half of the twentieth century, the higher education landscape was heavily influenced by economic demands. In the sciences, the focus shifted to fields which directly impacted industrial production–chemistry and physics departments grew to answer the demand for trained scientists and applied research. A well-rounded education became increasingly important for advancement throughout the private sector, which relied on literate, skilled employees.

Diversity in the Student Body: Opening the Door to Everyone

By World War II, the variety of academic disciplines available had revolutionized the higher education curriculum. Yet the demographics of higher education remained largely unchanged. Despite the establishment of colleges for women and minorities, higher education remained, by and large, the domain of the upper-class white male. Two postwar developments changed the face of the student population: the G.I. Bill and the affirmative action policies of the Civil Rights era.

To help ease the postwar economy back into normalcy, the federal government passed the GI Bill, which paid for the college education of 8 million returning GIs. A grateful recipient recalled: “[T]he government paid for all expenses; they paid for tuition; they paid for books, and they gave us a magnificent sum of $90 a month for food and housing.” 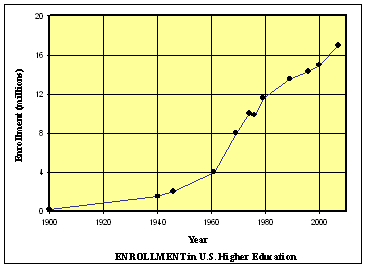 The GI Bill transformed the college student body by removing the major hurdle to higher education: the cost. Lower socioeconomic groups were finally represented on campus. The number of college students nearly doubled in the 1940s, from 1.5 million in 1940 to 2.7 million in 1950, as veterans swelled the ranks. The “magic carpet to the Middle Class,” as the GI Bill was called, permanently linked higher education and the American Dream. A college degree was now the ticket to a better life. The federal government assumed “a new obligation to assure equality in educational opportunity.” This commitment manifested in such measures as the Truman Commission Report, which specified policies for broader participation in higher education. The community college system was born of this legislation.

The ‘universal access to higher education’ stipulated in the Truman Report remained an empty ideal for many Americans, however. Merit-based college admissions removed obstacles for less wealthy students, yet minorities continued to endure discrimination. It was not until the Civil Rights era that the ideal of student diversity expanded to include racial as well as socioeconomic factors. Multiculturalism grew out of a commitment to include underrepresented minorities in higher education, but evolved into a broader recognition that a culturally diverse student body enriched the educational experience for all. In terms of college admissions, this ideal was expressed in affirmative action policies. 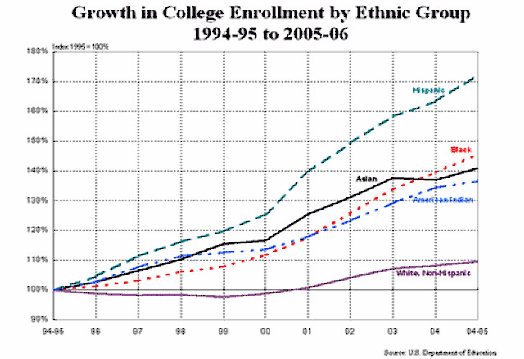 Affirmative action was designed to level the playing field for all applicants by instituting special advantages to students who faced a more difficult path to higher education due to a legacy of discrimination. The policy became increasingly controversial towards the close of the twentieth century, and in the 1990s was eliminated in Texas, California, and Washington amid charges of ‘reverse discrimination.’ Multiculturalism may have subsided from college discourse, but cultural diversity continues to prevail in the student body and in the curriculum.

Diversity in Instructional Media: The End of the Classroom?

Technology permeates our daily lives, drives our economy, and increasingly, delivers our higher education. Distance education has grown by leaps and bounds since the first online university was accredited in 1991, growing at an average annual rate of 40 percent through 2002. The Boston-based market research firm Eduventures has estimated that by 2008, one in ten college students will be enrolled in an online degree program. 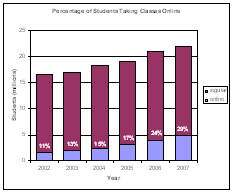 The impact of online media on higher education cannot be overstated. The online delivery format has made higher education accessible to a population for whom campus-based learning is not an option. Working adults, stay-at-home moms, and rural and international students have unprecedented access to college programs through the Internet. The average age of college students has soared to 36. About 30 percent of college students participate in online education.

The virtual classroom uses a diverse array of instructional methods and media to facilitate learning, including ‘live’ videoconferencing, satellite broadcasts, interactive multimedia presentations, ongoing chat room discussions, and computer exercises and tutorials. Students have a range of visual and auditory learning materials at their fingertips, with 24-hour access to instructional videos and remote databases for research.

The U.S. Distance Learning Association defines online education as “The acquisition of knowledge and skills through mediated information and instruction, encompassing all technologies and other forms of distance learning.”

Virtual learning has added new diversity to when, where, and how we learn. As a supplement to face-to-face campus instruction, interactive online media allows instructors to accommodate a wider range of learning styles. College education is shifting from a passive listening experience to active, project-based learning facilitated by interactive technology.

“The professor is moving from the sage on the stage to the guide on the side.” –Dr. Joe Boland, director of Georgia Tech’s Center for Distance Learning.

The new diversity in educational media parallels developments in the global information economy. Many argue that students who learn online are more adept at conducting business in virtual space. They learn to “access, analyze, process, and communicate information; use information technology tools; work with people from different cultural backgrounds; and engage in continuous, self-directed learning,” according to one report. These are crucial skills for a workforce that routinely collaborates with people in remote locations via the Internet; for whom information technology is a job requirement; and who rely on continuous education to stay up to speed.

The New Landscape of Higher Education: Looking Ahead

The American college system has evolved into a provider of rich, relevant training for all adults. Diversity in the curriculum, the student body, and teaching methods have transformed higher education into a flexible resource for students at any stage of life.

What lies ahead? The “post-industrial university,” according to one report, will use “rapidly maturing information technologies to build upon the timeless values of scholarship, collegiality, open dialogue, and intellectual integrity.” Instruction will become more creative and dynamic, as college educators design new educational formats to engage an increasingly diverse population of learners.

The sources for school statistics and data is the U.S. Department of Education's National Center for Education Statistics and the Integrated Postsecondary Education Data System unless otherwise noted.

Disclosure: EducationDynamics receives compensation for many of the featured schools on our websites (see “Sponsored School(s)” or “Sponsored Listings” or “Sponsored Results” or “Featured Graduate School(s)”. So what does this mean for you? Compensation may impact where the Sponsored Schools appear on our websites, including whether they appear as a match through our education matching services tool, the order in which they appear in a listing, and/or their ranking. Our websites do not provide, nor are they intended to provide, a comprehensive list of all schools (a) in the United States (b) located in a specific geographic area or (c) that offer a particular program of study. By providing information or agreeing to be contacted by a Sponsored School, you are in no way obligated to apply to or enroll with the school.

This site does not provide a comprehensive list of all schools that offer a particular program of study.

This is an offer for educational opportunities that may lead to employment and not an offer for nor a guarantee of employment. Students should consult with a representative from the school they select to learn more about career opportunities in that field. Program outcomes vary according to each institution’s specific program curriculum. Financial aid may be available to those who qualify. The information on this page is for informational and research purposes only and is not an assurance of financial aid.